For our English-speaking friends

The exceptional history of Commarin Castle

Commarin Castle in the commune of Commarin, in the Côte d'Or department, in Burgundy, 40 km west of Dijon, is situated on the historical Road of the Dukes of Burgundy. It has been in the same family for 26 generations; never sold, though it has often passed through heiresses, it is today a seat of the Comte Bertrand de Vogüe. Heir to a monument which has survived for centuries , he endeavours to keep alive its human character. 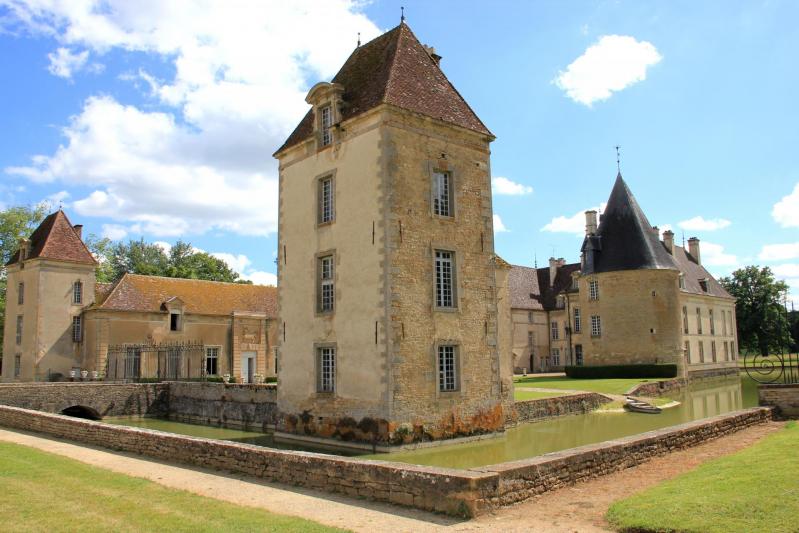 Classified as a Monument Historique since 1949, Commarin Castle is an outstanding testimony to the past, each century having left its mark, while respecting that of the preceding generations. Though the site has its origins in a Gallo-Roman villa, Commarin is first mentioned as a maison forte, in a document dated 1214. Its seigneurs were a cadet branch of the seigneurs of Sombernon, part of the lineage of the first Dukes of Burgundy. In 1346, Jean de Cortiamble and his son Jacques, chamberlain to Philip the Bold, Duke of Burgundy, rebuilt the castle as a fortified seat. The size and disposition of this moated stronghold established the site and size of the future buildings. The two cylindrical towers with conical roofs date from this rebuilding work, as does the vaulted chapel. Commarin passed to Agnès de Cortiamble, eldest daughter of Jacques, who brought it as part of her dowry to Jean de Dinteville, seigneur des Chenets. 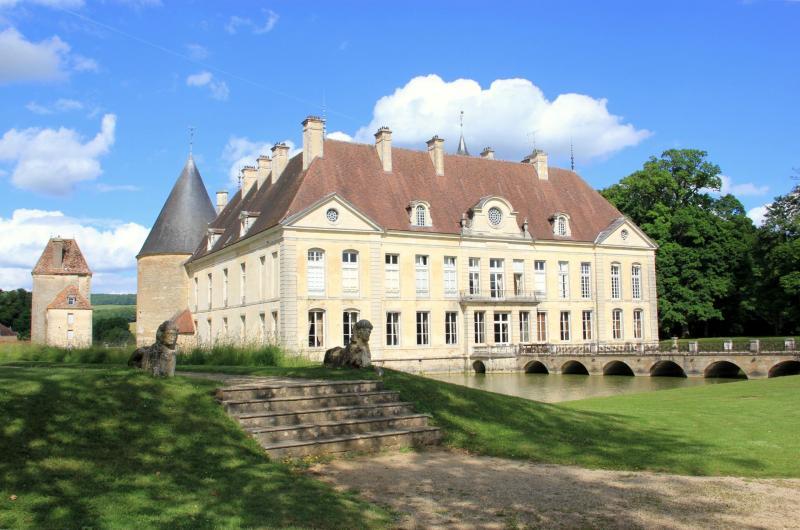 In the 16th century, Commarin Castle underwent radical transformation to convert it into a more modern habitation. The chapel in the East wing was redecorated with sculptures and a terra cotta Entombment. A series of heraldic tapestries woven ca. 1515-1522, in which family coats of arms of the Dinteville-Pontailler alternate with alchemical symbols, remain in the house. A triptych was executed in 1526, with portraits of Girard de Vienne and his wife. In the 17th and 18 th centuries, the castle underwent major reconstruction within its ancient walls, surrounded by its moat, which is traversed by a bridge with six arches. At the beginning of the 17 th century, Charles de Vienne rebuilt the East wing  and then demolished the North wing; the resulting U-shaped building encloses a North-facing cour d'honneur. He built an elegant stable wing, re-situated the former jeu de paume in the outer court  (basse cour ) terminated with two pavilions (1622-1623). Following the collapse of a corner tower, the Southern corps de logis and Western ranges of the enclosed medieval court were rebuilt and given the present classical façades, following designs by the Dijonnais Philippe Pâris (1702-1703).

Its furnishing in the early 18th century by Marie-Judith de Vienne, marchioness de Damas d'Antigny, grandmother of Talleyrand - whose mother spent her childhood at Commarin - made it very much what it looks like today. Some outbuildings were added to the château.

The castle avoided pillage during the French Revolution. The Germans occupied it in World War II, but it was always treated with respect and retained its magnificent parquet floors and tapestries. In the 19 th century , the French style parterre gardens were removed in favour of a fashionable parc à l'anglaise, an English landscape garden. In 2004, the trees immediately around the château were cut down and a return to the former gardens was undertaken.

The Castle is open to visitors from April to November.

WELCOME TO THE CASTLE !

From one family to another

Loyal to the dukes

Jean de Cortiamble owned the estate in 1346: he inherited it from his uncle Pierre de Commarin who died childless. He re-built the castle at the end of the 14th century. His son Jacques extended the castle by adding two round towers and the chapel. The same Jacques accompanied John the Fearless to the crusade of Nicopolis and was taken prisoner with him. After two years of negotiation (he had to raise the money for the ransom), he came back home along with the duke.

Jacques' daughter married Jean de Dinteville; when Jacques died in 1427, his son-in-law inherited the castle. Their son died with Charles the Bold in front of the walls of the city of Nancy. Later, Commarin fell to the Vienne family, a very old family. One of their members , Guillaume, was the first knight of the Golden Fleece, an order created by Duke Philip the Good.

The estate was raised to the level of a county in 1588 for Antoine de Vienne, and Charles I de Vienne rebuilt the castle, as did his son, Charles II. Architect Philippe Pâris laid out a vast courtyard surrounded by outhouses and built another classical dwelling house at the bottom of the court, flanked by two wings. In this brand new castle, Anne de  Chastellux, Charles'wife , gave birth to a daughter, Marie-Judith, in 1699. Two years later, her mother wrote in her diary of the following accident: " A tower collapsed , at noon, during lunch. We had already noticed that it was in ruin. This tower was located in the dwelling house  where my daughter's bedroom was, so I was really scared. I ran into the courtyard, the nurse showed me my daughter by the window. We did not know how to reach the room, because the staircase had collapsed too. This accident incited us to repair."

By marriage, the Damas became Commarin's new owners, as Marie-Judith de Vienne married Joseph-François de Damas, marquess of Antigny, and became later Talleyrand's grandmother (Talleyrand was one of Napoleon I 's ministers). She became a widow at the age of 37, with two dependent children, plus a castle, lands....and debts. But she did not lose courage. She took care of her money, lived a simple life, managed her possessions sensibly, faced up to her creditors, gave a good education to her children and a good dowry to her daughter. She entirely refitted the castle:new outhouses and stables, and replanted the neighbouring wood in 1747. She died in 1780, at the age of 81.

At the beginning of the 20th century, here was Diane Pastré, Charles de Vogüe's widow; she had a life of luxury in Paris,  but also reserved all her energy for her Burgundian castle, which she restored and modernized.

The one who never left

In 1793, the Marquess Charles de Damas was arrested by the Revolutionaries and locked up in jail. But the inhabitants of Commarin liked him and succeeded in having him released . But he was arrested once more. This time, the castle was sold as an émigré possession . Still, he never left Burgundy. He showed some written proofs , saying he had never left his castle, and he was released for good.

The visit of the castle

Discover the Large Room ( 18 m long and 9 m wide); plays used to be performed here. We can still see the pulleys for the sets, between the beams. Marie-Judith "repaired this room", as she wrote.

Then we have Marie-Judith's nice living-room with its typical Burgundian flooring , its family portraits and paintings. Here is a portrait of King Henri IV of France...tradition says he fell in love with Madame de Cypierre , a relative of the Vienne. She received him one day in Commarin. Henri was represented as a hunter, at the feet of the infatuated lady.

Don't miss the living-room with its gorgeous tapestries, with fresh and bright colours. They date back to the 15th century: coats of arms belong to the Dinteville and Vienne families. Marie-Judith restored them and put them back on the walls, because she loved them. 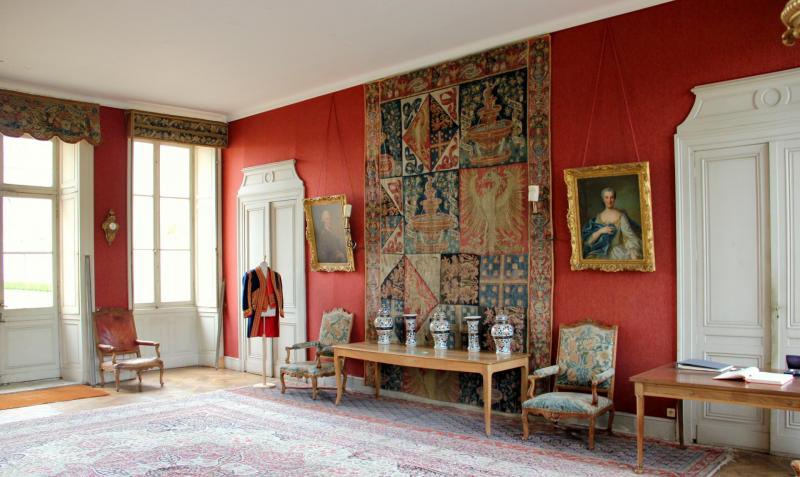 -  Organise cultural and intangible actions aimed at offering the public a real cultural season in the context of the Commarin Castle and its environment. The latter, classified as a Historical Monument, member of the Historical Route of the Dukes of Burgundy, and of the Association of the Castles of Burgundy Franche-Comté, constituting a remarkable architectural framework, and an exceptional historical and cultural heritage, rich of more than 900 years of history ;

-  To federate all the potential external actors in order to encourage and support the organization of cultural and festive public events at the castle or all forms of art likely to be hosted there ;

-  To encourage meetings and cultural exchanges on the site of the castle of Commarin ;

-  To facilitate and widen public access to the artistic and cultural works of art in the castle, while helping to increase the interest of the public in their visit ;

- To train and sensitize the public and the members of the Association to the history and knowledge of the heritage ;

-  Enable institutional players (Commarin Town Hall, Commune Community, Department, Region, etc...), tourist and media players, and the public, to have a different and complementary interlocutor to the owner ;

-  To defend the built heritage and the quality of the sites and heritage of the Pays de l'Auxois-Sud (Côte d'Or department), and more particularly the commune of Commarin.

You can help us !

Find our membership form by following the link : Join us

Donate to our Association

We can help you if necessary : Contact The Commarin Castle Friends Society 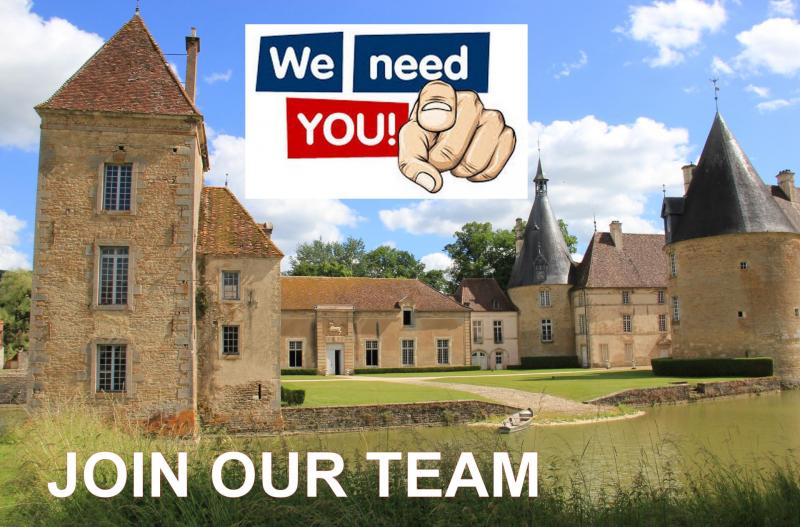 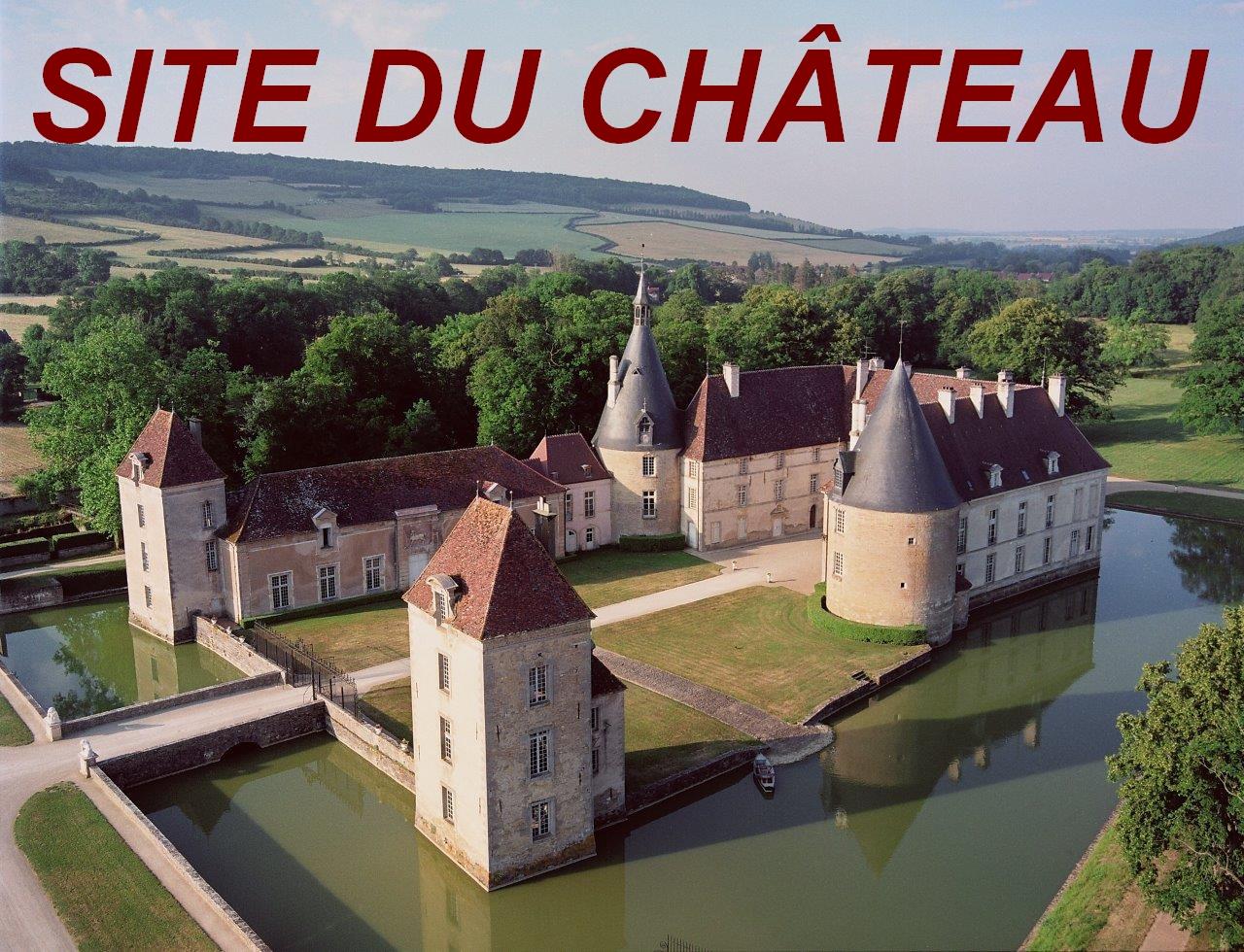